Every day, news reports detail the arrests of child predators and their horrific impact on innocent victims.

Child sexual and physical exploitation is exploding online, and law enforcement officials are using new tools to combat it.

With an estimated one million predators and only 6,000 specialized law enforcement officials’ worldwide dedicated to fighting child exploitation, agents are outnumbered.

Towards that end, thousands were arrested as a result of a months-long crime campaign conducted by 61 Internet Crimes Against Children (ICAC) task forces, located in all 50 states and comprised of more than 4,500 federal, state, local and tribal law enforcement agencies, to specifically arrest suspects of online child sex crimes.

The campaign, labeled “Operation Broken Heart,” which ran from from March 1 through May 31, wrapped up last month, leading to more than 2,300 arrests nation-wide.

During the course of the operation, the task forces investigated more than 25,200 complaints of technology-facilitated crimes against children and delivered more than 3,700 presentations on Internet safety to over 390,000 youth and adults.

“No child should ever have to endure sexual abuse,” Attorney General Jeff Sessions said.

“And yet, in recent years, certain forms of modern technology have facilitated the spread of child pornography and created greater incentives for its production.

“We at the Department of Justice are determined to strike back against these repugnant crimes.”

“It is shocking and very sad that in this one operation, we have arrested more than 2,300 alleged child predators and investigated some 25,200 sexual abuse complaints.”

“Any would-be criminal should be warned: this Department will remain relentless in hunting down those who victimize our children.”

The operation targeted suspects who:

Over the course of the operation, the Washington ICAC Task Force conducted 51 investigations involving peer-to-peer networks resulting in 47 arrests.

(Learn More. Law enforcement can more effectively collaborate to form a force multiplier of resources and capabilities in the ever-expanding global world of crime. Homeland Security Investigations (HSI) bridges the gap. HSI has the ability to follow the “pipeline” and to proactively pursue the larger networks of illicit activities. HSI can serve as a force multiplier from anywhere domestic; from Minot, ND to New York City – to almost anywhere around the world with our international partners, either through the Transnational Criminal Investigative Units (TCIU’s) – which expand HSI’s footprint and enhance cooperation between partner nations and the United States – or through our 63 HSI International Attaché offices. State and Local law enforcement has the ability to leverage HSI’s unique legal authorities and global footprint to help combat crimes in their community; such as the growth and proliferation of transnational crimes and the rampant and far reaching cyber crimes – most notably, the darknet. Courtesy of The IACP and YouTube.)

The ICAC Program is funded through the Department’s Office of Juvenile Justice and Delinquency Prevention (OJJDP), to help federal, state, and local law enforcement agencies enhance their investigative responses to offenders who use the Internet, online communication systems or computer technology to exploit children. To date, ICAC Task Forces have reviewed more than 775,000 complaints of child exploitation, which resulted in the arrest of more than 83,000 individuals.

In addition, since the ICAC program’s inception, more than 629,400 law enforcement officers, prosecutors and other professionals have been trained on techniques to investigate and prosecute ICAC-related cases.

Since the launch of Operation Predator in 2003, HSI has arrested more than 16,000 individuals for crimes against children, including the production and distribution of online child pornography, traveling overseas for sex with minors, and sex trafficking of children.

In fiscal year 2016, more than 2,600 child predators were arrested by HSI special agents under this initiative and more than 800 victims identified or rescued.

HSI is a founding member of the Virtual Global Taskforce, an international alliance of law enforcement agencies and private industry sector partners working together to prevent and deter online child sexual abuse.

HSI is a worldwide leader in the fight against the sexual exploitation of children.

Prior to the creation of the agency in 2003, legacy U.S. Customs special agents investigated the disbursement of illegal child pornography that was often sent by mail or purchased overseas.

With the advent of the Internet, the sharing and trading of child pornography now primarily occurs online.

In addition to the legacy expertise, HSI special agents also have the authority to investigate the illegal movement of people and goods across U.S. borders, and because the Internet is borderless, the sharing of contraband online is an international crime.

An image on the Web of a child being sexually abused can be seen by anyone anywhere in the world.

And, with 200 U.S. offices and more than 70 offices overseas, HSI has the ability to follow a case – to rescue a victim or arrest a predator – wherever in the world it may lead.

As part of ICE’s Cyber Crimes Center (C3), the CEIU uses cutting edge investigative techniques to bring justice to consumers, producers and distributors of child pornography, as well as to predators engaging in child sex tourism.

The efforts of the CEIU, in addition to ICE’s participation in national programs like Operation Predator and international partnerships like the Virtual Global Taskforce, have resulted in the rescue of thousands of children.

Collaborating with law enforcement partners around the country and the world, Operation Predator brings together an array of resources to target these child predators. 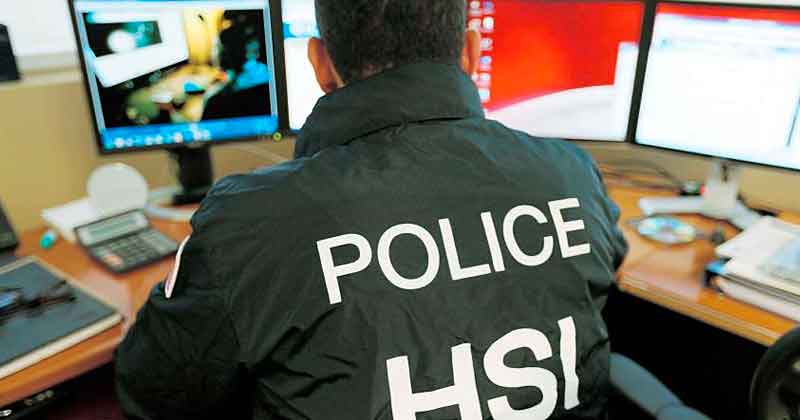 As part of the effort:

ICE encourages the public to report suspected child predators and any suspicious activity through its toll-free hotline at1-866-DHS-2-ICE; TTY for hearing impaired: (802) 872-6196, or by completing its online tip form.

Suspected child sexual exploitation or missing children may also be reported to the National Center for Missing and Exploited Children, an Operation Predator partner, at 1-800-843-5678 or http://www.cybertipline.com.

(Make it harder for predators to hide; download the Operation Predator app today from iTunes or Google Play. Courtesy of ICE .gov and YouTube)

You can help by reporting suspected abuse or by providing tips regarding fugitives and unknown suspects.