Eight thousand people angry about President-elect Donald Trump’s policies on immigration, the environment, LGBT rights and other issues marched in the streets of downtown Los Angeles on Saturday, the fourth day of anti-Trump demonstrations.

The march was peaceful, unlike the Friday night protest by 1,000 people that resulted in the arrests of 187 adults and eight juveniles, Los Angeles police said.

Protests have been held across the nation and most have been peaceful, lacking the intensity from the previous night.

But Portland, Oregon was one exception as violence flared there. A man was shot and wounded early Saturday during a protest and demonstrators threw projectiles at police. A few dozen arrests were made over the last two days — 19 on Saturday and 17 on Friday.

(Riot squads throw flash grenades and tear gas at anti-Trump protesters chanting ‘kill the police’ as dozens are arrested in Portland and thousands march in Los Angeles in fourth night of chaos. Police hurled flash grenades and used tear gas on protesters on Saturday night as anti-Trump demonstrations continued across the country in the fourth night of unrest since his shock election victory. Dozens of people were arrested in Portland, Oregon, where crowds threw burning road flares at police. Courtesy of Channel 14 and YouTube)

In New York, thousands of people marched two miles and gathered outside Trump Tower, the President-elect’s home in Manhattan, where they chanted and proclaimed that he was “not my president.”

“I don’t know what we can actually do to change things,” protester Allen Meisner told CNN, “but we have to keep coming and making sure his hatred and his fear and the anger that he’s stirring up and using to get elected doesn’t manifest itself in our country.”

“I think that we are getting together to support each other as a community because this is a huge loss,” Andrea Garcia said. “This election has set us back and has definitely shown the world that we are not as advanced as we claim we are.”

By 8 p.m. ET, only a few dozen protesters remained and Fifth Avenue was open for traffic. Police said a few people were arrested Saturday but that the protest was largely peaceful.

‘Thank you for the unity’

In Los Angeles, police tweeted around midday that about 8,000 people were “exercising their 1st Amendment Right. No arrests have been made.”

The Los Angeles Times reported it was the largest anti-Trump rally in the city so far. 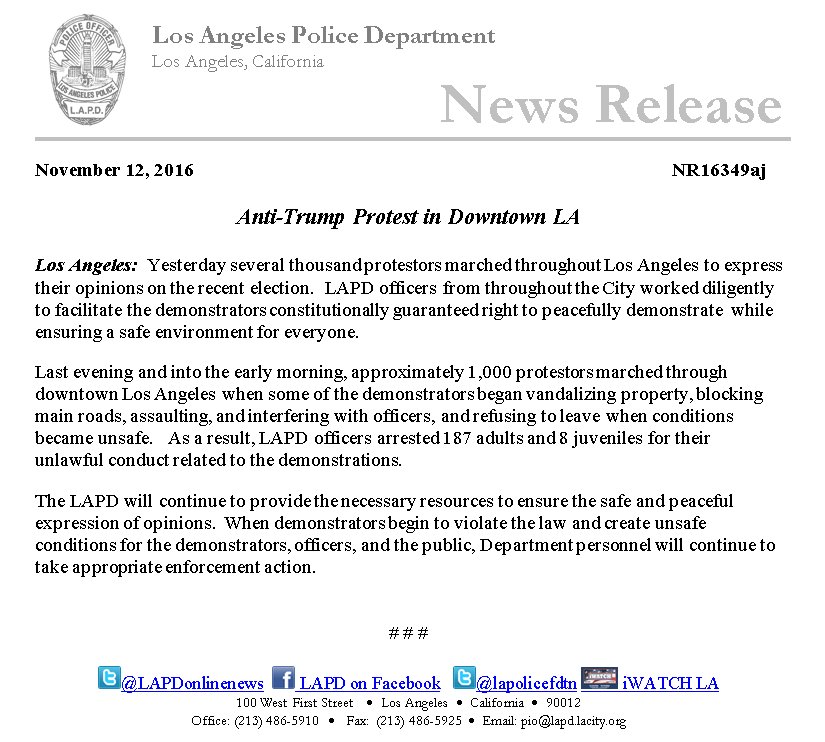 (Some of the anti-Trump protests in the US have been organized by groups that were sponsored by Clinton sympathizer and billionaire George Soros. Courtesy of RT and YouTube)

In Indianapolis, two police officers were injured by protesters throwing rocks Saturday evening, according to a tweet from the Indianapolis Metro Police Department’s official account.

Seven people were arrested as police tried to keep peace in downtown Indianapolis.

Protests in Portland, Oregon turned violent as demonstrators threw bottles and projectiles at police, and attacked a film crew, police said. Nineteen arrests have been made on Saturday night, according to Portland Police.

They were blocking the city’s light rail service and restricting traffic flow, police said. Officers were attempting to disperse the protesters using “diversionary bang device” after warning them to leave the street.

A man was shot early Saturday on the Morrison Bridge during a protest march. The suspect was believed to be in a vehicle on the bridge when a confrontation unfolded with a member of the crowd, Portland police said in a statement. The suspect got out of the vehicle and fired multiple shots before fleeing.

The victim’s injuries were not life-threatening, and he was treated at a hospital.

Portland has been the site of the most violent anti-Trump demonstrations. Thursday night, a small group broke away and smashed the windows of businesses and a number of vehicles at an auto dealership.

On Saturday, police began tweeting photos of protesters and asking people to identify them so arrests can be made.

In Chicago, police told CNN they are investigating an incident this week in which a group of people reportedly beat a man while yelling that he voted for Trump.

Cell phone video captured the man in a minor traffic accident Wednesday on Chicago’s West Side.

The 49-year-old driver, David Wilcox, told CNN affiliate WGN-TV that a car scraped the side of his vehicle as he was about to make a left turn at a busy intersection.

“I heard a lady yell something about ‘that guy is one of those Trump supporters,’ ” Wilcox told the station. “I turned and said to her, ‘That has nothing to do with this.’ “

The situation then apparently escalated as bystanders yelled anti-Trump taunts at Wilcox. The video shows Wilcox being knocked to the pavement, repeatedly being punched and kicked as a handful of people gather around him.

On Saturday, police began tweeting photos of protesters and asking people to identify them so arrests can be made.

For Sunday, demonstrations are planned in Washington in the morning; in Central Park West in New York in the afternoon; and in Oakland, California, and San Francisco at night.