“These industry-specific reports are the first of their kind released by Darktrace, representing an important effort to surface the data underpinning the rapidly evolving threat landscape that we are defending against,” explains Toby Lewis, Darktrace’s Global Head of Threat Analysis.

“The trends reveal crucial sector-specific challenges, from the tendency for hackers to siphon off the energy sector’s resources in the form of crypto-jacking*, through to the invaluable nature of patient data which leads to data exfiltration in the healthcare sector.”

“The surge in credential-based attacks across the retail sector reflects the fact that identity theft will be a key trend for 2023, increasing the need for AI-based behavioral analytics for understanding employee actions in rich context and authenticating the actions taken using certain credentials.”

Amidst a global energy crisis, Darktrace’s energy sector report reveals that illegal crypto-mining threats, (events involving bad actors stealing energy and processing power from other devices and networks), are on the rise across the industry. The report divulges two real-world crypto-mining threat finds from a European and U.S. energy organization respectively, which were stopped by Darktrace’s AI technology.

In the first case, attackers were caught attempting to mass pool crypto-mining capabilities using five internal servers at the organization.

(Darktrace 6 gets you ‘loop ready’, regardless of where you are in your Cyber AI journey. Bringing PREVENT into the Cyber AI Loop, and with significant enhancements across DETECT and RESPOND, Darktrace 6 is now available to all customers. Courtesy of DArktrace and YouTube. Posted on Dec 9, 2022.) One threat found in the report from August 2022 details the discovery of a never-before-seen attack tool lying dormant inside a well-known U.K. automotive retailer.

Months before Darktrace had been adopted by the retailer, one of its devices had become infected with novel malware that lay dormant, establishing a foothold and waiting for the right time to launch an attack.

After deployment, Darktrace AI caught the malware when it made multiple authentication attempts using spoofed credentials for one of the organization’s security managers.

If successful, the attack could have undermined the organization’s entire security posture, allowing malicious software to gain control of the company’s infrastructure from within.

Hospitals and other healthcare organizations are often viewed as a ‘soft target’ for cyber-criminals, with extremely rich data sources from which attackers can profit by selling patient information such as medical records, credit cards, and/or banking details. This new report unveils a real-world sophisticated threat faced by U.S. healthcare providers in which a malicious PowerShell script***** was discovered to be deployed on one of the organization’s internal servers, an attempt to give bad actors remote control over the target network.

The threat was autonomously thwarted by Darktrace’s RESPOND™ technology before attackers could cause harm.

(From the initial phishing email to encryption of devices, see a hypothetical attack scenario and how Darktrace RESPOND neutralizes an intrusion using Autonomous Response technology. Courtesy oof DArktrace and YouTube. Posted on Apr 16, 2021.)

Darktrace delivers complete AI-powered solutions in its mission to free the world of cyber disruption.

Featuring breakthrough innovations from the Darktrace Cyber AI Research Centre in Cambridge, UK, and its R&D center in The Hague, The Netherlands, Darktrace has filed more than 115 patent applications and published significant research to contribute to the cyber security community.

(Darktrace’s technology vision is of a Cyber AI Loop, a system that improves cyber security and augments humans at every stage of an attack life cycle, from the pre-incident phase with PREVENT, to DETECT and RESPOND for an in-progress attack, and – coming in 2023 – HEAL, for the post-incident phase, after an attack has taken place. Courtesy of Darktrace and YouTube. Posted on Oct 24, 2022.)

Darktrace’s technology continuously learns and updates its knowledge of ‘you’ for an organization and applies that understanding to achieve an optimal state of cyber security.

Darktrace was named one of TIME magazine’s ‘Most Influential Companies’ in 2021, employs over 2,100 worldwide, and protects over 7,700 organizations globally from advanced cyber threats.

The data pertains to January-October 2022 and is compared with the same period in 2021. 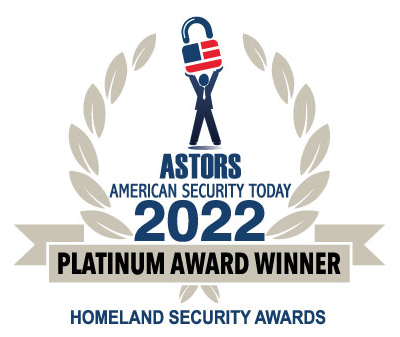 (Darktrace co-founder Emily Orton discusses the risks associated with remote working and why AI is necessary to secure increasingly complex digital infrastructures, in this interview with The Telegraph. Courtesy of The Telegraph, Darktrace, and YouTube.) (From the initial phishing email through to the encryption of devices, see a hypothetical attack scenario and see how Darktrace RESPOND neutralizes an intrusion using Autonomous Response technology. Courtesy of Darktrace and YouTube.)

AST Reaches both Private & Public Experts, which is essential to meeting these new challenges.

Other areas of concern include Transportation Hubs, Public Assemblies, Government Facilities, Sporting & Concert Stadiums, our Nation’s Schools & Universities, and Commercial Business Destinations – all enticing targets due to a large number of persons and resources clustered together.

How Computer Vision is Revolution-izing the Manufacturing Supply Chain