A total of 118 law enforcement officers were killed in the line of duty in 2016, according to the FBI’s annual Law Enforcement Officers Killed and Assaulted (LEOKA) report released today.

Of those deaths, 52 were accidental and 66 were felonious.

Additionally, 57,180 officers were assaulted in the line of duty, with nearly 30 percent of those officers being injured in the incidents.

All of these numbers increased from figures reported in 2015, when 45 officers died accidentally and 41 were feloniously killed in the line of duty.

There were 50,212 assaults against law enforcement listed in the 2015 LEOKA report.

Through its Uniform Crime Reporting Program, the FBI collects data about the circumstances surrounding assaults against law enforcement and officer deaths.

The 66 felonious deaths occurred in 29 states and in Puerto Rico.

The number of officers killed as a result of criminal acts in 2016 increased by 25 when compared with the 41 officers who were feloniously killed in 2015.

The average age of the officers who were feloniously killed was 40 years old.

At the time the 66 law enforcement officers were feloniously killed: 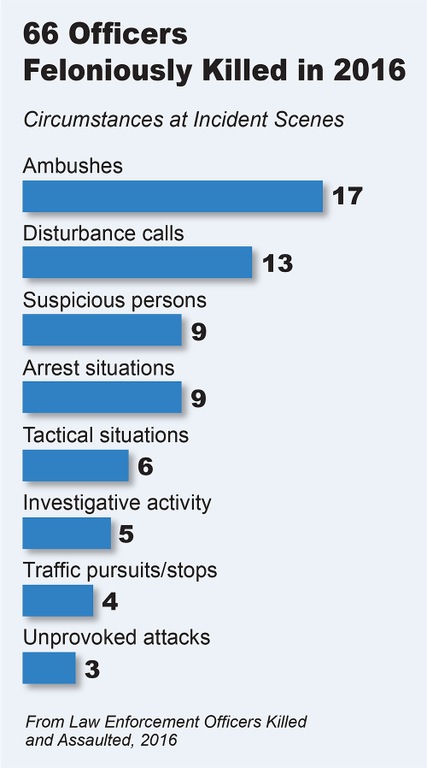 Thirty of the felonious deaths occurred in the South, 17 in the West, 13 in the Midwest, four in the Northeast, and two in Puerto Rico.

Of the 52 officers accidentally killed:

Twenty-four of the accidental deaths occurred in the South, 12 in the Midwest, nine in the West, five in the Northeast, and two in Puerto Rico.

Law Enforcement Officers Killed and Assaulted, 2016 is available exclusively on the FBI’s website at https://ucr.fbi.gov/leoka/2016.

The LEOKA Program uses the data it collects to provide data-driven officer safety training to law enforcement officers around the country.

Of the 66 officers who were killed in criminal incidents:

Of the 52 officers who were killed in accidents:

The annual LEOKA report also contains a separate section on federal law enforcement officers who were killed or assaulted in the line of duty last year.

According to the 2016 federal data, one federal law enforcement officer was killed and 324 were injured.

Although LEOKA is an annual report released each October, the FBI’s Criminal Justice Information Services Division regularly updates the statistics on its LEOKA Resources Page.

Visit the page for updated preliminary statistics on law enforcement officer line-of-duty deaths, including the breakdown of accidental and felonious deaths.