In an effort to provide a more timely release of data to the public, the FBI is releasing three sections of Law Enforcement Officers Killed and Assaulted, 2017 ahead of the traditional fall timetable.

The remaining portions of the publication, which present data reported to the FBI concerning law enforcement officers assaulted in the line of duty in 2017, will be available later this year.

(53-year-old Police Officer Keith Boyer with the Whittier Police Department was shot and killed while responding to a motor vehicle crash around 8 a.m. on February 20. Courtesy of CBS Los Angeles and YouTube. Posted on Feb 21, 2017)

In addition, new technology allows the database containing Law Enforcement Officers Killed and Assaulted information to process more data than ever before.

Additional details can be processed and shared about incidents in which officers are killed and assaulted in the line of duty.

As a result, all of the statistics previously included in the publication are still available, but some statistics are not directly comparable with prior years’ statistics as topics are now broken into more categories.

A description of all changes can be found at Updates to Law Enforcement Officers Killed and Assaulted, 2017. 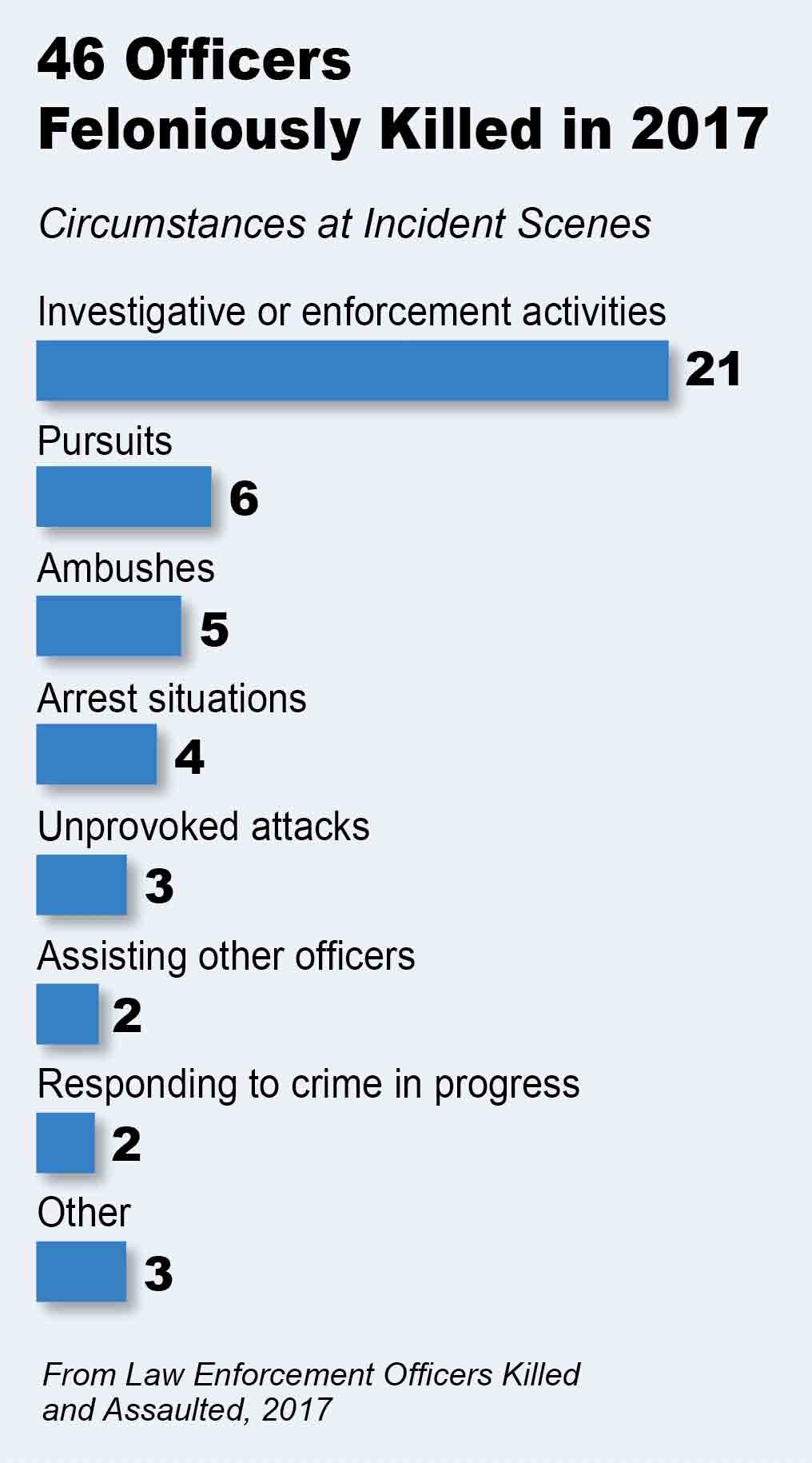 According to statistics reported to the FBI, 93 law enforcement officers were killed in line-of-duty incidents in 2017.

Comprehensive data tables about these incidents and brief narratives describing the fatal attacks are included in the sections of Law Enforcement Officers Killed and Assaulted, 2017, released today.

The 46 felonious deaths occurred in 25 states and in Puerto Rico.

The average age of the officers who were feloniously killed was 38 years old.

The victim officers had served in law enforcement for an average of 11 years at the times of the fatal incidents.

Of the 46 officers feloniously killed:

(On July 27, at 2:40 p.m., 38-year-old Lieutenant Aaron Allan with the Southport Police Department was killed while responding to a vehicle crash with entrapment. Courtesy of RTV6 The Indy Channel and YouTube. Posted on Jul 27, 2017)

Offenders used firearms to kill 42 of the 46 victim officers.

Three officers were killed with vehicles used as weapons, and one officer was killed with a knife.

Of the 42 officers killed using firearms:

(Around 10:20 p.m. on October 1, 44-year-old Corporal Michael Middlebrook with the Lafayette Police Department was shot and killed in an ambush (entrapment/premeditation) when he responded to a report of shots fired. Courtesy of KATC and YouTube. Posted on Oct 7, 2017)

Forty-seven law enforcement officers were killed accidentally while performing their duties in 2017, a decrease of five from the 52 officers accidentally killed in 2016.

The majority (29 officers) were killed in automobile (car/truck/SUV/van) accidents.

The average age of officers who were accidentally killed was 40 years old.

The average number of years the victim officers had served in law enforcement was 12.

Of the 47 officers accidentally killed:

(Shortly before midnight on May 27, Deputy Sheriff William Durr with the Lincoln County Sheriff’s Department was shot and killed while responding to a domestic disturbance at a residence in Bogue Chitto. Courtesy of WWLTV and YouTube. Posted on May 28, 2017)

The 47 accidentally killed officers died in a variety of scenarios:

Of the 29 officers killed in automobile accidents, 12 were wearing seatbelts, and 15 were not.

Data about seatbelt usage was not available for two of the officers.

Of the 15 officers who were fatally injured in automobile accidents and were not wearing seatbelts, two were seated in parked motor vehicles at the times of the incidents.

(42-year-old Deputy Sheriff Mason Moore with the Broadwater County Sheriff’s Office was shot and killed while attempting a traffic stop around 2:30 a.m. on May 16 in Three Forks. Courtesy of KRTV NEWS and YouTube. Posted on May 20, 2017)

Law Enforcement Officers Killed and Assaulted, 2017 is available exclusively on the FBI’s UCR website at https://ucr.fbi.gov/leoka/2017. The FBI collects data on officer assaults and deaths from local, state, tribal, campus, and federal law enforcement agencies from around the country, as well as organizations that track officer deaths.

The Bureau publishes the data annually through its Uniform Crime Reporting (UCR) Program, and the national-level statistics can be used to help create data-driven safety training for officers.

(On July 5 at 12:30 a.m., 48-year-old Police Officer Miosotis Familia with the 46th Precinct of the New York Police Department was shot and killed in an unprovoked attack in the Bronx. Courtesy of CBS New York and YouTube. Posted on Jul 11, 2017)

Among the officers who were accidentally killed:

(29-year-old Deputy Sheriff Colt Allery with the Rolette County Sheriff’s Office was shot and killed around 6:10 p.m. on January 18 in a rural area of Rolette during an arrest situation following a motor vehicle theft and pursuit. Courtesy of KFYRTV and YouTube. Posted on Jan 10, 2018)

Editor’s note: Our thoughts and prayers are with the families of all the Law Enforcement Officers lost, both blood and blue. Our nation is a safer place for your courage and selfless dedication. Your lives mattered and our gratitude will be with you always.

(A nonprofit 501(c)(3) organization headquartered in Washington, DC, the Memorial Fund built and continues to maintain the National Law Enforcement Officers Memorial — the nation’s monument to law enforcement officers killed in the line of duty. The Memorial Fund is a principal organizer of the National Police Week observance each May and hosts a Candlelight Vigil at the Memorial each May 13 to honor all fallen officers. In addition, the Fund maintains the largest, most comprehensive database of line-of-duty officer deaths, conducts research into officer fatality trends and issues, and serves as an information clearinghouse.)