The man was processed by CBP officers after he was brought to the port by Mexican law enforcement officials Thursday afternoon.

“It is not uncommon for CBP officers to encounter fugitives who are returning to the U.S. after fleeing to a foreign country to avoid prosecution, “said Michael Neipert, CBP Presidio Port Director.

“In this case the cooperative spirit existing between U.S. and Mexican law enforcement agencies led to the apprehension and identification of this high profile target.”

Daniel Carrillo was added to the Texas 10 Most Wanted Sex Offender list in March 2014, and was taken into custody on March 8, 2018, by Mexican law enforcement authorities in Ojinaga, Chihuahua, Mexico.

Carrillo, a U.S. citizen, is affiliated to the Partido Revolucionario Mexicano gang.

In 1999, Carrillo was convicted of sexually assaulting a 4 year-old boy in Brewster County. He subsequently received a ten year sentence in TDCJ prison.

In 2011, while residing in Houston County, Carrillo was arrested for Aggravated Assault with a Deadly Weapon after he allegedly attacked a female with a weapon.

He later failed to appear for trial and a warrant was issued in December 2012 by Houston County for his arrest.

Carrillo was also wanted by the US Marshals Service for Sex Offender Registration Violation and by the Brewster County Sheriff’s Office for Failure to Register as a Sex Offender.

Tip information is currently being reviewed to determine if a reward will be paid.

The apprehension was made when Mexican authorities escorted 39-year-old Carrillo to the port from Mexico.

CBP officers took custody of the subject and performed law enforcement queries confirming an active warrant for his arrest.

He was then turned over to the U.S. Marshal Service.

While anti-terrorism is the primary mission of U.S. Customs and Border Protection, the inspection process at the ports of entry associated with this mission results in impressive numbers of enforcement actions in all categories. 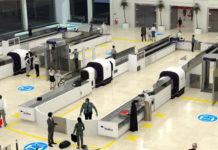 How Public Safety Can Support Victims of Domestic Violence