By Rory Callinan, The Australian

Hopes of finding three missing American marines alive were dashed yesterday after the US military confirmed that its initial rescue efforts had been downgraded to a recovery mission.

An MV-22 Osprey helicopter crashed into the ocean on Saturday near Cape Manifold, about 50km northeast of Yeppoon, after taking off from the USS Bon­homme Richard about 4pm.

(A search-and-rescue operation was underway Saturday after three Marines went missing when their aircraft crashed into the sea off the eastern coast of Australia during landing, the Marine Corps said. Courtesy of NBC News and YouTube. Posted on Aug 6, 2017)

Family members believed one of the missing men was Osprey crew chief Nathan Ordway from Kansas.

Corporal Ordway’s sister Taylor asked people to “please pray for my brother” in a post on the 31st Marine Expeditionary Unit’s Facebook page.

(The service members went missing after an Osprey aircraft they were in crashed off the coast of Australia. Courtesy of ABC News and YouTube)

One US serviceman was report­ed to have received treatment for a leg injury in Rockhampton Hospital yesterday.

The incident was characterised by marines as a “mishap”.

The marines said the aircraft “entered the water” after embarking on regularly scheduled operations.

Last night, elite Australian div­ers and HMAS Melville, a hydrographic survey vessel, were being mobilised to help in the search.

“This team will then assist in the US recovery mission. Australian Army aviation assets are at short-notice readiness to support any further requirements.’’

Senator Payne said Australia’s “thoughts are with the crew and the families affected”.

The incident will reopen concerns about the Osprey, which has a controversial past.

The same type of aircraft has been operating off Australia’s landing helicopter dock ships and was also used to ferry dignitaries and media to the USS Bonhomme Richard at the launch of the Talisman Sabre joint military exercise last month. 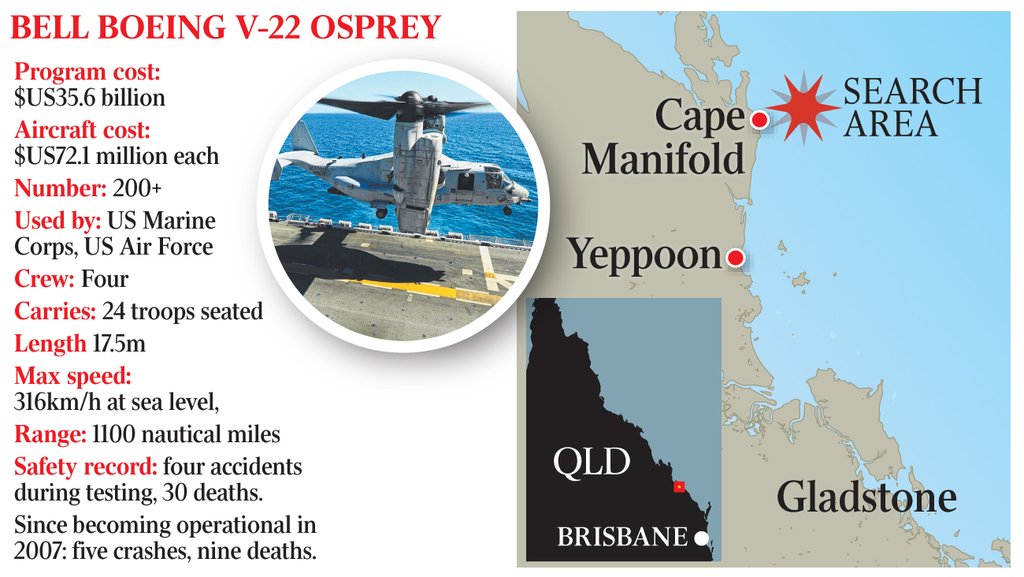 The Ospreys, which take off like a helicopter and fly like a plane, using two tilting rotors, have a chequered safety history, recording four crashes during testing in the 1990s, with 30 deaths.

In 2007, Time magazine profiled the aircraft’s awkward development, describing it as “a flying shame” and so problematic that “(then vice-president) Dick Chen­ey repeatedly tried to cancel it”.

The article noted the Osprey was conceived in response to the aborted 1980 Desert One mission to rescue hostages trapped in Iran, that involved three helicopters breaking down and the crash of a fourth chopper with a transport plane killing eight troops.

(An interesting video of US Military conducting refueling operations of their Bell Boeing V-22 Osprey aircraft. Courtesy of ArmedForcesUpdate and YouTube. Posted on Dec 18, 2014)

But the development of the tilt-rotor aircraft took decades and billions of dollars.

No Australians were involved in the crash on Saturday.

Coastguard officers not involved in the search reported a search area about four nautical miles off the coast in waters about 30m deep.

Editor’s note: Our thoughts and prayers are with missing Marines, the Marines who were injured in the crash, their families and United States Marine Corps as a whole.