The FBI’s National Crime Information Center, or NCIC, had a key assist in the arrest—the state trooper, after spotting a suspicious vehicle at a rest stop, ran the license plate through the NCIC database and received word back quickly that the car had been stolen by a suspect in a Kentucky homicide.

A chase ensued, but ultimately the suspect in this case with connections to three different states was taken into custody.

Today, the FBI’s NCIC system—created to give our law enforcement partners access to a computerized index of documented criminal justice information whenever and wherever they need it—celebrates its 50th anniversary.

Launched on January 27, 1967, the NCIC database, according to Assistant Director Stephen Morris of the Criminal Justice Information Services (CJIS) Division, is “a cornerstone of the CJIS Division’s information-sharing efforts, providing a lifeline to our local, state, federal, and tribal partners 24 hours a day.”

The information in the NCIC database can also help law enforcement officers perform their duties more safely—for instance, notifying them if the person in the car they are about to approach might be armed and dangerous.

The very first NCIC hit came in May 1967, when a New York City officer radioed in a request for a search of a license plate. Within 90 seconds, he was informed that the car had been stolen the previous month in Boston.

By 1971, all 50 states were connected to NCIC and began making inroads in combating crimes that crossed state lines.

And over the next three decades, the database expanded and adapted as new technology and new information needs emerged. For example, in 1975, a new file was added to record the details of missing persons cases.

(It’s been called the lifeline of law enforcement—an electronic clearinghouse of crime data that can be tapped into by virtually every criminal justice agency nationwide. Courtesy of ncicbackground and YouTube)

In 1980, Canadian warrants were added to the database. In 1999, a major technological upgrade—known as NCIC 2000—added new capabilities, including the ability to store digital images and expanded data fields, and also led to near-instant results for queries.

During the last 15 years or so, additional file categories have been added, including identity theft, gangs, known or suspected terrorists, and violent persons.

Currently, the database is organized into a total of 21 files and contains 12 million active records entered by local, state, and federal law enforcement agencies—and it handles an average of 14 million transactions a day.

So what does the future hold for NCIC?

The CJIS Division is preparing for its next major upgrade, known as NCIC 3rd Generation, or the N3G Project, and is working with its stakeholders to identity new functionalities to modernize and expand the capabilities of the existing NCIC system.

CJIS has already conducted the largest user canvass in its history, reaching out to criminal justice users in all 50 states and U.S. territories to help identity additional needs, which is vital input that will be used in the development of the next generation National Crime Information Center.

Here’s to the next 50 years of this vital crime-fighting tool!

The Origins of NCIC

The FBI first got into the business of collecting, collating, and disseminating criminal identification records and histories in 1924.

Over time, Bureau personnel maintained information about crimes with pen and paper, index cards, and typewriters—and they did so effectively—but as the volume of work increased, it was clear that something needed to change.

In 1965, an executive in the then-FBI Identification Division (since renamed the Criminal Justice Information Services Division) proposed that the Bureau lease data-processing equipment to “constructively assist the enforcement efforts of all participating law enforcement agencies” that contributed criminal histories, wanted notices, reports of criminal activity, etc., to the FBI.

The original proposal was limited to law enforcement agencies in the Washington, D.C. metropolitan areas, but the value of such a system for all of law enforcement couldn’t be ignored.

Director J. Edgar Hoover presided over a meeting during which the decision was made to implement a computer system that would centralize crime information from every state and provide that information to law enforcement agencies around the country.

Working with the International Association of Chiefs of Police, the FBI created an advisory board of state and local police to develop nationwide standards and also consulted with the U.S. Department of Commerce to build an effective telecommunications system.

And on January 27, 1967, the National Crime Information Center—soon to be better known by its initials NCIC—was launched. 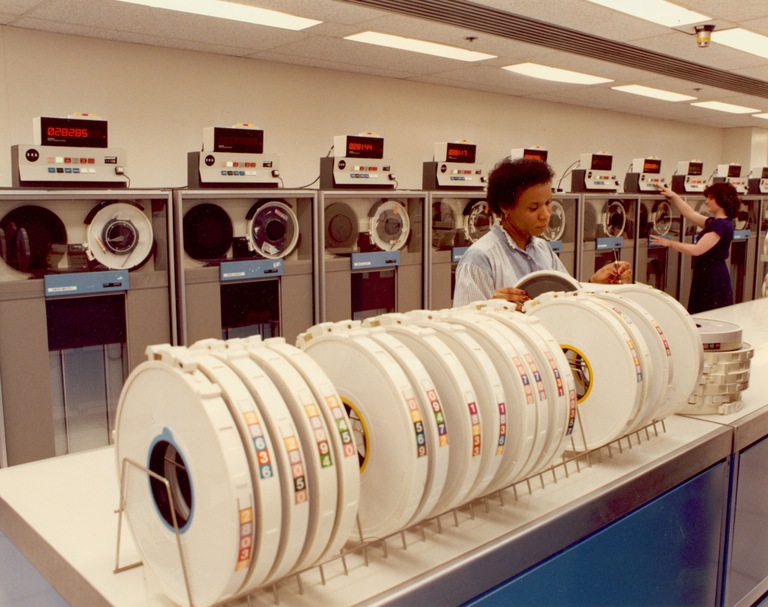 Shown here are Bureau personnel in the mid-1970s managing the computer storage tapes that contained all NCIC records and transaction logs.

This legacy system required operator intervention to ensure that tapes were effectively maintained.