The status update, based on railroad-submitted quarterly data, shows freight railroads continue to make consistent progress while passenger industry progress in installing and activating the life-saving technology only slightly increased.

The latest data, current as of December 31, 2016, confirms freight railroads now have PTC active on just 16 percent of tracks required to be equipped with PTC systems—up from 12 percent last quarter.  made less progress—with a slight increase to 24 percent from 23 percent.

(CNN’s Chris Frates reports goes inside the engineer’s cabin of a passenger train to learn how technology is used to prevent crashes and derailments, May 14, 2015. Courtesy of CNN and YouTube)

Due in large part to Amtrak’s significant progress on PTC, 41 percent of passenger railroads’ locomotives are now fully equipped with PTC technology, compared to 29 percent the previous quarter.

Freight railroads’ percentage of locomotives fully equipped with PTC technology rose to 42 percent, up from 38 percent.

“With less than two years remaining to complete the implementation process, it is imperative that railroads continue to meet implementation milestones.”

PTC systems are designed to prevent certain train-to-train collisions, over-speed derailments, incursions into established work zone limits, and trains going to the wrong tracks because a switch was left in the wrong position.

Only if some key implementation and installation milestones are met may railroads be eligible to obtain a limited extension to complete certain non-hardware, operational aspects of PTC system implementation no later than December 31, 2020, subject to the Secretary of Transportation’s approval. 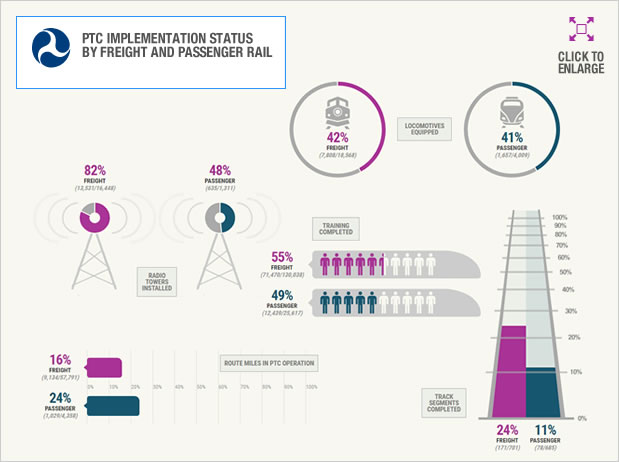 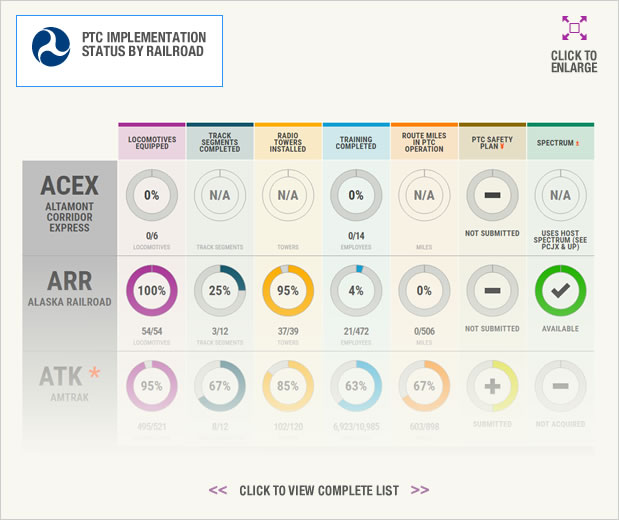 You may view the interactive graphic of each railroad’s PTC implementation progress, at https://www.fra.dot.gov/app/ptc/