San Antonio Police announced Monday the arrest of a man suspected of targeting and killing a 50-year-old police officer.

Otis Tyrone McKane, 31, was arrested around 4:30 p.m. while riding with a woman and a 2-year-old child in a car on Interstate 10, Chief William McManus said.

“This is the person’s whose image we saw on surveillance,” McManus said at a press conference. “This is also the person we believe is responsible for the cold and calculated murder of Detective Marconi.”

Detective Benjamin Marconi, a 20-year veteran of the department, was shot to death while writing a traffic ticket outside of police headquarters Sunday.

(A man suspected of fatally shooting a San Antonio, Texas, police detective over the weekend has been arrested, officials announced this evening. A SWAT team arrested 31-year-old San Antonio resident Otis Tyrone McKane around 4:30 p.m. CT, said San Antonio Police Chief William McManus. He was arrested without incident on Interstate 10, where he was a passenger in a car driven by an adult female, McManus said. A 2-year-old was also in the car at the time of McKane’s arrest. No one was injured during the arrest. Courtesy of ABC News via NEWS 18 and YouTube) 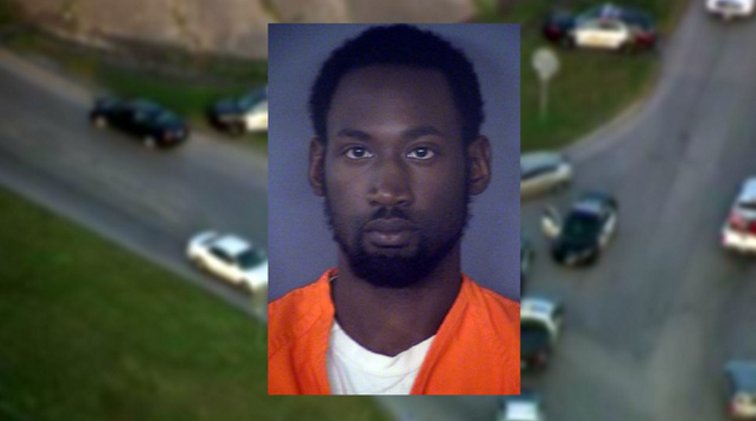 The department released footage of a man seen inside police headquarters four hours before the shooting and video of a car leaving the scene, CNN-affiliate KPRC reported.

McManus, who said he believed Marconi was targeted because he was a police officer, told reporters that he doesn’t believe McKane has any relationship to the driver pulled over before the shooting, CNN-affiliate KRIS reported.

McKane was kept under surveillance for several hours before a SWAT team made the arrest without injuries, McManus said. The woman he was with was driving at the time of the arrest, he said.

Police have located the black Mitsubishi Galant seen leaving the shooting scene and are processing it for evidence, McManus said. Texas Rangers, U.S. Marshal deputies and FBI agents assisted in the investigation, the chief said.

“The motive for the capital murder is still unknown,” McManus told reporters.

“This is very much an ongoing investigation.”

The killing happened a few minutes before noon on Sunday.

Officer Marconi pulled over a driver on the south side of the police station. He returned to his patrol car to write a ticket.

That’s when a man pulled up behind him.

The man walked up to the patrol car driver’s side window and shot the officer in the head, McManus said.

The man then reached through the open window and shot him a second time, McManus said.

After the shooting, the man returned to his vehicle and drove away.

San Antonio police released this image of the suspect’s car.

McManus likened the shooting to the fatal ambushes of police officers in Dallas, Texas, and Baton Rouge, Louisiana, earlier this year.

In July, sniper Micah Xavier Johnson killed five officers who attempted to protect activists that were marching in Dallas following the deaths of Alton Sterling and Philando Castile, two black men killed by police this summer.

It was the deadliest single incident for US law enforcement since September 11, 2001.

Police are investigating motive in this case, including a possible connection to a shooting Sunday morning in Dallas involving an officer, McManus said.

(Families of police officers share their biggest fears as their loved ones put themselves in harm’s way. Courtesy of CNN and YouTube)

It wasn’t the only ambush attack on Sunday: A police officer in St. Louis, Missouri, was wounded in an ambush shooting but is expected to survive.
“It’s always difficult, especially in this day and age where police are being targeted across the county,” McManus added.