By Fox News US

New photos were released Monday of the former health teacher in Tennessee and the female student he is accused of abducting, as investigators tried to “heighten the urgency” of the case and bring in new tips before the trail goes cold.

“It’s been a week, but we’re not giving up hope. Stay vigilant, stay alert, and let us know if you spot these individuals or this vehicle,” the Tennessee Bureau of Investigation posted on Twitter regarding the disappearance of 15-year-old Elizabeth Thomas.

The bureau has been searching for the blond-haired student and 50-year-old Maury County Schools health teacher Tad Cummins since March 13.

The TBI has issued a second Amber Alert for the girl and investigators believe Cummins may have abducted the girl to “potentially sexually exploit her.”

The TBI also released surveillance footage of the suspect days before the kidnapping.

A statement from the bureau Saturday added, “Nothing investigators have learned about Cummins or his intentions for the young girl since issuing the AMBER Alert calms the imminent concern for Elizabeth’s well-being. In fact, it only heightens it.” 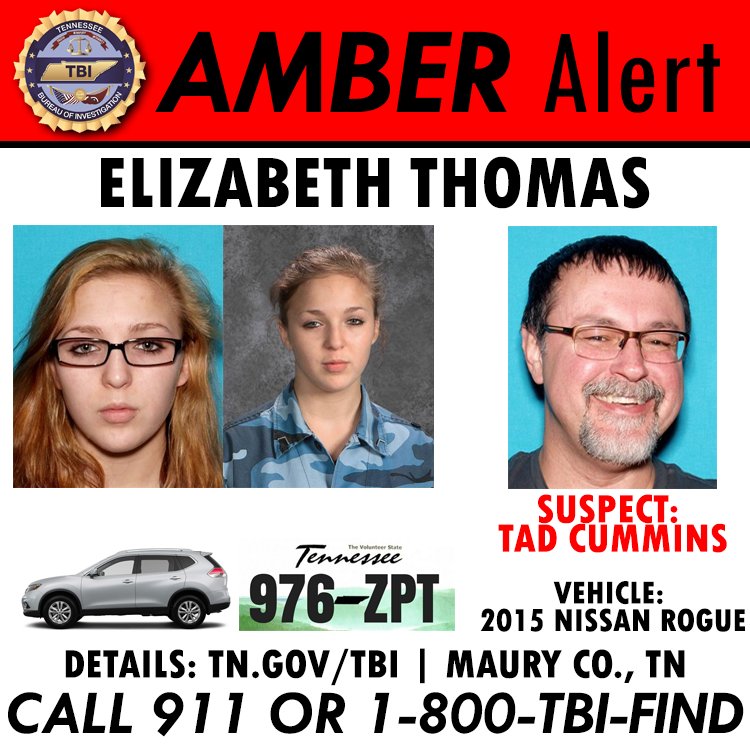 The photos released Monday show Cummins, wearing a green camouflage hat and a Navy blue jacket, walking around a store.

Cummins was believed to be armed with two handguns, Fox 17 Nashville reports.

TBI reported Cummins took out a $4,500 cash loan before disappearing. He was caught kissing Thomas at school on Jan. 23, the attorney for the Elizabeth’s father, Anthony Thomas, told The Columbia Daily Herald.

The school district fired Cummins the day after his disappearance, according to Fox 17.

“The TBI has received approximately 250 tips from 24 states,” it said in the statement.

“The low number of tips, combined with the limited resources Cummins is believed to have in his possession, leads investigators to believe he may be keeping her out of view of the general public.”

Cummins in on the state’s ‘Top 10 Most Wanted’ list with a $1,000 reward for information leading to his capture.